Special offer - You will get crystal lights cleaner FOR FREE with each order. Click HERE >>

The crystal chandelier has one property verified by years. It is its versatility from the perspective of interior style. It successfully passes through time and with minor modifications, the crystal chandelier is still a popular choice for many people, as the main chandelier into the living room, whether it is a classic, rustic or modern style.

If you are furnishing a modern interior, you can reach for the silver finish of a classic crystal chandelier. Complement it with another sources of lighting - spot lights and wall lamps to create an elegant lighting design element that every visitor will remember.

The crystal chandelier certainly does not have to shine only in the living room. Just as beatifully it decorates other rooms, both the kitchen and bedroom. Click on the link and get inspired by the interiors illuminated by a crystal chandelier.

The crystal chandelier as we know it today has its roots in Italy, where the first glass workshops were established in the 16th century. One of the tasks they got from the rulers, was to improve the lighting of their residences, especially during festivities.

The combination of cascaded lighting fixtures and hand-cut glass trimmings, which multiplied the power of candles, did not escape the attention of monarchs from all over Europe. And so the crystal chandelier set forth to other countries.

In Bohemia, the first crystal chandelier based on the Italian tradition was made at the beginning of the 17th century. In 1743, on the occasion of the coronation of the Habsburg Empress Maria Theresa onto the Czech Queen, a new type of crystal chandelier resembling a royal crown was made.

The crystal chandelier has experienced the greatest expansion of its production since the middle of the 18th century. More and more cut crystal is used for its production, which is gaining recognition all over the world for its quality.

Even today, you can enjoy the view of a beautiful crystal chandelier in your living room. 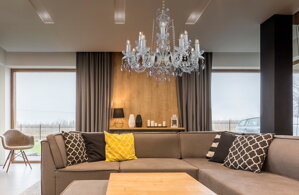 Choose a chandelier by room