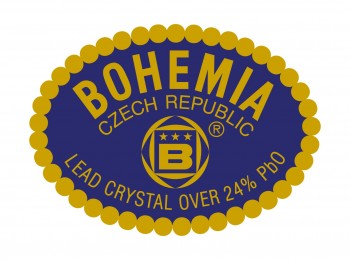 The joint-stock company Crystal BOHEMIA was established on 28th November 2008 in order to preserve and to further develop the tradition of lead crystal production in Poděbrady. Crystal BOHEMIA a.s. became the owner of the glassworks on 29th April 2009 and, on 21st October of the very year, it put the factory into operation again after more than 12 months lasting shut-down. Recently, it keeps about 330 employees.

The BOHEMIA Glassworks located in Poděbrady continues the heritage of Bohemian cut crystal glass. This tradition dates back to the beginning of 18th century and it has influenced the entire glass industry of the world in the course of time. We can state proudly that the Bohemian crystal glass belongs to the best that came into being in the respective sector.

The glassworks in Poděbrady is the major manufacturer of lead crystal in the Czech Republic. It ranks also with the top world suppliers of lead crystal at all. 90% of the factory output are directed to foreign markets.

The blue and gold oval trade mark BOHEMIA CZECH REPUBLIC – LEAD CRYSTAL OVER 24% PbO has become synonymous with Bohemian lead crystal. It provides also customers with a guarantee of quality and combination of values by means of those the company communicates: utility, beauty and style.

What Our Customers Say

All chandeliers in stock

The crystal chandelier is still popular

Vintage interior and our chandeliers

Member of the Crystal Valley project

We use cookies to enhance your visit of this website, analyze its performance and collect data about its usage. We may use third-party tools and services to do so and collected data may get transmitted to partners in the EU, USA or other countries. By clicking on 'Accept all cookies' you declare your consent with this processing. You may find detailed information or adjust your preferences below.

Show details
Our webpage stores data on your device (cookies and browser's storages) to identify your session and achieve basic platform functionality, browsing experience and security.
We may store data on your device (cookies and browser's storages) to deliver non-essential functions that improve your browsing experience, store some of your preferences without having an user account or without being logged-in, use third party scripts and/or sources, widgets etc.
Use of analytic tools enables us to better understand needs of our visitors and how they use our site. We may use first or third party tools to track or record your browsing of our website, to analyze tools or components you have interacted with or used, record conversion events and similar.
We may use cookies and third party tools to enhance products' and/or services' offer of ourselves or those of our partners, its relevancy to you, based on products or pages you have visited on this site or on other websites.
Close
This site is protected by reCAPTCHA and the Google Privacy Policy and Terms of Service apply.